Today marks the release of jQuery UI version 1.7. In many ways, this release is the start of an entirely new direction for the library. As core team members and official sponsors of jQuery UI, we’re very proud of the team’s efforts and the result of all of our hard work. 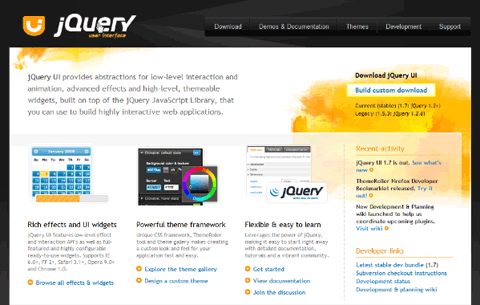 So What’s New In the Release? #

In short: a whole lot! Here are some highlights.

You can read all about the details over at the new jQuery UI Blog.

We find it particularly exciting that the jQuery UI CSS themes are now hosted on Google’s Ajax Libraries CDN. As far as we know, this is the first CSS Framework Google has hosted like this and we’re thrilled at the performance possibilities. We highly encourage you to use the themes hosted on their servers whenever using a gallery theme. Also, you can always link to jQuery UI on their CDN as well, and that continues to be the fastest way to load jQuery UI on the web.

We want to thank the entire jQuery UI team and everyone else in the jQuery community who contributed to this release. We invite you to join our planning wiki to help us on future releases and if you’re interested and able, we would love development help as well! Check out the jQuery UI Development Center to find out more.